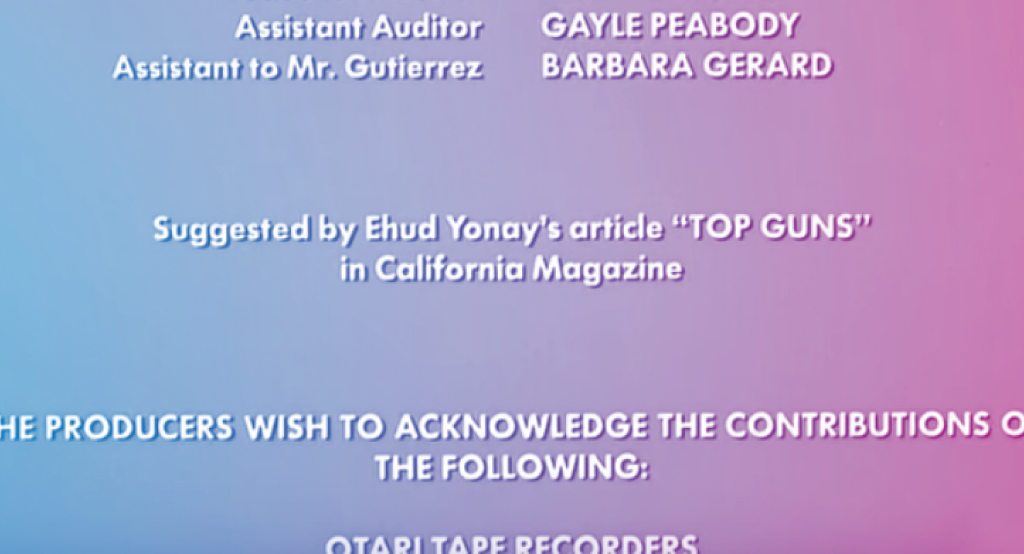 As an entertainment law firm for independent film and television creators, DeepFocus sees many interesting copyright legal issues raised by the complaint, particularly since the potential for stratospheric damages based on the sequel’s supersonic ascent at the box office appears as high as geopolitical tensions between the United States and the former Soviet Union. But for indie filmmakers, the issue of whether a license was required for the original film should be brightest on the radar. That’s because whether your film project is a summer blockbuster or a SAG-AFTRA micro-budget picture, the production legal issue of whether to pay to license someone else’s intellectual property is the same.

Paramount did acquire movie rights to the Yonay article before producing Top Gun in 1986. A quick background on the 2022 claims: Yonay’s heirs assert that the rights granted to Paramount (which the studio allegedly needed to make the derivative work of Top Gun: Maverick) reverted to them after they served Paramount with a proper notice of intent to reclaim the rights. The legal issue is that although a copyright owner can (and Yonay did) license the right to make and distribute derivative works (such as a film from existing intellectual property such as a magazine article), the owner can under certain conditions also reclaim the right.

Section 203 of the Copyright Act, 17 U.S.C. § 203, permits authors (or, if the authors are not alive, their heirs) to terminate grants of copyright assignments and licenses that were made on or after January 1, 1978. As the Copyright Office explains, Section 203’s “provisions are intended to protect authors and their heirs against unremunerative agreements by giving them an opportunity to share in the later economic success of their works . . . , to regain the previously granted copyright or copyright rights.”

But did Paramount need a license to the 1983 article to create and distribute Top Gun (and therefore its sequel)? The 1986 film’s credits state that it was “Suggested by Ehud Yonay’s article ‘Top Guns’ in California Magazine.” A factual article that merely inspires a fictional story is not something that must be licensed. Copyright law does not protect the idea of a story. “Generally speaking, ideas are as free as the air . . . .” Desny v. Wilder, 46 Cal. 2d 715, 731 (1956). Neither can anyone claim the exclusive right to write a screenplay based on facts such as that the Navy operates a Fighter Weapons School in San Diego where pilots with call signs such as “Maverick” train to fly equipment such as the F14A Tomcat. The Yonay article describes those facts in detail, and so could anyone else. The way such facts are arranged in a particular story may be protected, at least to the extent that the story does not consist of customary elements of any story in the genre. Copyright law calls such elements “scènes à faire” (for example, microfilm in a secret agent picture, gunfights in a western town, etc.). They are not protected because if they were, no one could tell other stories in that genre after the first one.

But Top Gun did not simply adapt “Top Guns” to the screen. If the filmmakers had done that, there would be no question of whether they needed to license the right to do it. The credit given suggests that what the Yonay article provided was not protected source material but instead unprotected inspiration. The Writers Guild Screen Credits Manual, for example, does not include a “Suggested by” credit, but the rules for determining “Screen Story by” credit provide that: “If the writer is furnished source material of a story nature but takes from it only a springboard, a characterization, an incident, or some equally limited contribution, creating a substantially new and different story from the source material, the writer may receive ‘Screen Story by’ credit, but only as the result of arbitration. In such cases, the author of the source material may be given credit that specifies the form in which such material was acquired — for instance, . . . ‘From a Saturday Evening Post Story by,’” . . . etc.”

So while Paramount did acquire rights to the article, the studio may not necessarily have needed those rights. Careful evaluation by copyright lawyers may support a conclusion that an existing work can be used without infringing copyright. There are a number of ways such use could happen. As noted, if the new work is not a copy or based on the old work but merely inspired by it, the new work does not need a license. Or the older work may have lost copyright protection because it was published without a copyright notice or never renewed. Using a work that is not protected by copyright does not require a license. The work could have fallen into the public domain simply as a result of its age. Fair use might also allow a new work to transform the old, changing its meaning into something original. None of the above would mandate a license to the old work.

Reasons to negotiate a copyright license

Assuming, then, that an indie filmmaker does not need a license, why would it ever make sense to spend money from a low or even micro film budget on getting one anyway? As counter-intuitive as it may seem, there are at least a couple of reasons it makes sense.

If a license can be negotiated for less than the copyright owner would normally ask for because production legal counsel has concluded that a work can be used under fair use, it could be an inexpensive form of errors and omissions insurance. Copyright litigation is almost always certain to cost a great deal more than any license of audio-visual rights. And since there is no guarantee that the losing party will be forced to pay the winner’s attorney’s fees, even if you ultimately win you may financially lose. A license works as a defense to a copyright infringement claim, enabling a filmmaker to avoid the risk of disputes like the one in the Top Gun: Maverick litigation in the first place. This is especially important for narrative films where the question of whether fair use applies can be more difficult to definitively answer than it can in the documentary film context. It’s a complex analysis that can change dramatically based on the facts—and even on the court that has jurisdiction over the dispute. Because litigation is a game of winners and losers (and in copyright litigation includes the possibility of large statutory money damages), it is prudent to stay out of its contested airspace whenever feasible. As actor James Tolkan as Tom “Stinger” Jordan, Commander of the Air Group of the USS Enterprise, tersely tells Tom Cruise’s Maverick and the other naval aviators in Top Gun, “There are MIGs in the area, and tensions are high.”

Another reason to negotiate a license despite it appearing that a license is unnecessary may be to maintain a positive relationship with the copyright owner. Suppose, for example, that the work being considered for a license is not a single magazine article about fighter pilots but part of a series of techno thrillers (for example, The Hunt for Red October, Patriot Games, and Clear and Present Danger)? Even if a license is not strictly needed under copyright law, a win-win approach that compensates authors for use of copyrighted works while allowing filmmakers to avoid risk at a reasonable cost may pay off handsomely when negotiating to use other works in other projects.

Line items in your indie film’s budget are not something to consider adding or increasing lightly. But to apply one more Top Gun metaphor, if you can negotiate a copyright license at a reasonable expense, you can think of it as a “hard deck.” That’s the safety zone above the ground that fighter pilots don’t go below. It prevents crashes on the path from skilled pilot to “the best of the best”, and it can serve a similar function for smart filmmakers. The last thing you need after your first independent feature takes off is the unexpected appearance of a MIG with a missile in the form of a copyright owner’s infringement action locked on your tail.

Questions about copyright licensing for your independent film or television project? Contact DeepFocus Law at (503) 975-8298 or schedule an entertainment attorney consultation.